We kicked off our week with a chilly nature walk.  Gone are the beach days of summer, but we like our walks on the beach in the cool days of autumn almost as much!  We were hoping to see some jellyfish (as I thought that would be a good choice for this week as we continue our look at invertebrates this term).  Unfortunately there wasn’t a jellyfish in sight, but the kids still had fun picking up every rock or piece of shell they could find…until we heard thunder rumbling in some approaching storm clouds.  We didn’t get rained on though, and the kids thought it was pretty cool to hear thunder without any rain or lightning.

From my journal of thanks this week:

The aforementioned Starbucks soirée was a meeting of the local homeschool moms bookclub to discuss our latest read, Emily Brontë’s Wuthering Heights.  I can’t say it was my favourite book we’ve read as a group, but there were a couple of quotes that made it into my commonplace book.

“He was, and is yet, most likely the wearisomest, self-righteous Pharisee that ever ransacked a bible to rake the promises to himself, and fling the curses on his neighbours.”

“A good heart will help you to a bonny face, my lad.” 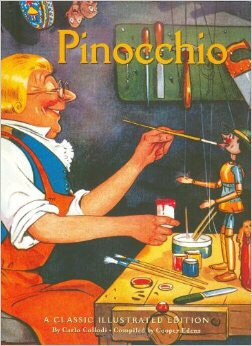 Carlo Collodi’s classic story is exciting to listen to and beautiful to look at with this luscious hardcover book (that I found for a few dollars at a local thrift shop), and we can never read just one chapter.

Robinson Crusoe (When he was stuck on the island) started to carve out a house on the side of a hill. He put his tent up at the entrance in front of the door to keep some of his stuff dry. He made little hooks on which he hung his gun and some other stuff on. Then he started to make a wall around a certain area to keep wild animals out so he could sleep peacfully. He looked around the island and found to his delight that there were goats. He found that the best way to shoot a goat since they were shy and fast on their feet. It was to hide up in the rocks because the goats down below rarely looked up while they were eating grass. One time when he was going to get a goat, he aimed and hit a mother. (He certanly didn’t mean to) because she had her baby right beside her and the gun shot scared the little one so much that he stood stock still. The baby was still drinking milk from his mother. Crusoe picked up the mother and carried her home but when he got there he found that the baby had followed him all the way back. He tried to feed him for a couple of days but since it would not eat he was forced to put him down. Thus Crusoe lived for a few months. 😦

Although we didn’t get to see any jellyfish at the beach this week we still spent our nature journalling time learning about and sketching them.  I used a couple of YouTube videos to “bring them to life” for the kids, one of which actually shows the microscopic nematocysts firing venom in slow motion.  It is pretty amazing to see!  Here are the links to the videos we used to talk about jellies and their stings:

I almost forgot to share my find of the week.  I was giddy to find this 1914 edition of Parables from Nature by Margaret Gatty at a local thrift store this week.  It’s fragile and will not be going on the kids’ shelves but will make a wonderful addition to mama’s library.  I’m using the modern paraphrase with Belle this year in year 1, but I adore the poetic rambling of the original for myself!

Looking ahead to week 3, we are anticipating a shorter school week as I will be flying out on Thursday with a couple of other homeschool moms to the HSLDA conference in Niagara Falls.  I’m looking forward to a weekend of learning and growing.  (I just hope this cough I’ve been battling will be gone by then!) So a wrap up of week #3 will more realistically happen the following week.

(Linking up today with the Weekly Wrap-Up at Weird Unsocialized Homeschoolers.)