I don’t get in to the thrift stores around town as often as I’d like to.  It’s just too difficult with littles ones in tow.  A few weeks back Belle and I did make the rounds one Friday afternoon, however, and I picked up this gem of a geography game. 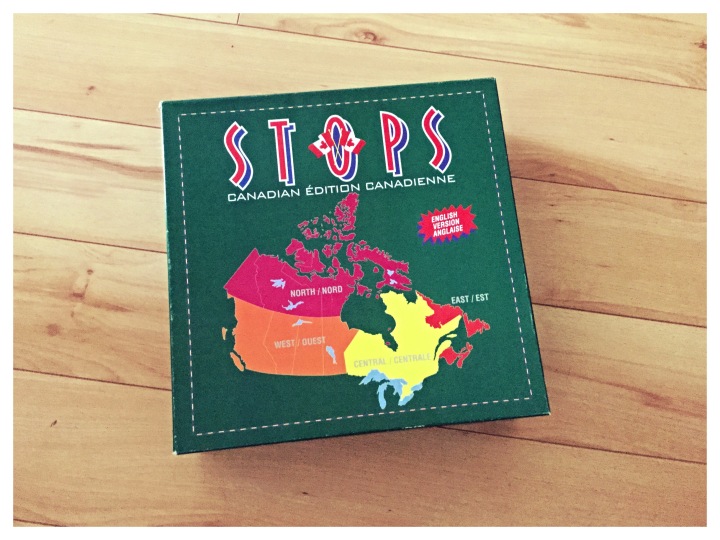 It has proven to be a Friday family night favourite!  I believe there is also a US version and a North American version.  Here’s how the Canadian version works.  The board is a map of the country with provinces and territories labelled.  There are 13 “stops” (10 provinces and 3 territories).  Teams take turns reading clues to each other, ranging from easy to difficult and scoring points accordingly.  Every clue describes a certain “stop”, and if you choose the correct province or territory you get the points.

I love that the game can be played with young and old.  The easy clues are simple enough for the youngest beginning geography student, and the difficult clues sometimes stump us old folks.  We play in teams so we can let the younger ones answer the simple questions and we can chime in on the trickier ones.  The kids love it too.  It’s especially cute to watch their overreaction when they draw a clue card from our home province.  They give it away with their giggles and eye rolls.

Last night we learned that Baker Lake in Nunavut is the geographical centre of Canada and the Canadian Arctic’s only inland community.  It is also known for its infinite number of beautiful photo ops.  We also learned that Florenceville, New Brunswick, was named after Florence Nightingale.  There were other places that popped up as we played last evening that PJ and I had visited and could explain to the kids, such as:

By the end of it, our kids thought their Mom and Dad had been just about everywhere.  We had to chuckle.  We’ve seen a lot of this country, but there is so much of the rest of the world we long to see!  Then it dawned on us that our kids themselves have been to every province except Manitoba and Newfoundland, but much of it when they were too young to recollect.  I see a cross country road trip in our future…one of these years when the kids will be old enough to appreciate and remember it!