The countdown is on!  Only ten days left until we are “back to school” around here.  So we’ve been drinking deeply of summer fun this week.  And thankfully the weather has cooperated.  Our annual week-long “heat wave” finally arrived this week.  Usually it’s in July that we are blessed with a few days of unbearable temperatures, but this year August gets the prize.

The week started with an after church barbecue to celebrate Banky’s (Grampy’s) birthday with friends and family. 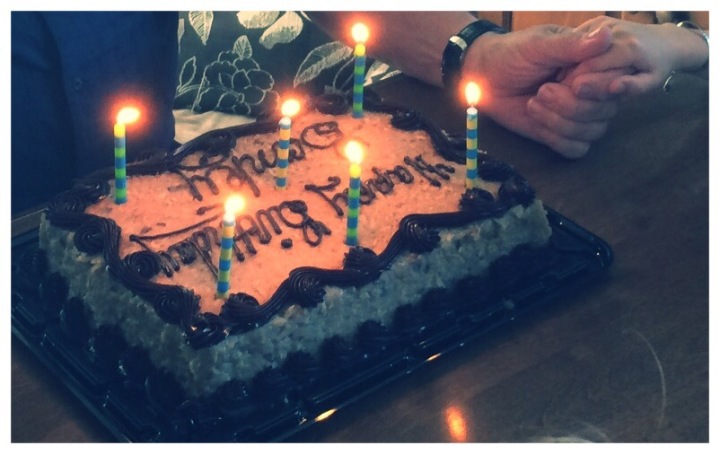 We took advantage of PJ’s day off and spent Monday at the beach, complete with a picnic lunch.  It also happened to be a grrrrreat day for flying the kite!  Who doesn’t love watching a kite flip and fly and flutter its tail against a beautiful blue sky?  It’s just a magical summer delight, isn’t it?  Little Mister was enthralled and kept pointing up at the red octopus waving back at him in the breeze.

This week was Old Home Week, an annual provincial exhibition and carnival.  It’s a tradition for our family to go a couple of times to enjoy the rides, the animals, and of course the cotton candy and candy apples!  Speaking of candy apples, we had to console Little Mister with apple slices dipped in peanut butter while his sisters enjoyed their caramel apples today.  Worked like a charm.  (PJ opted to save his red candy apple until after Little Mister went to bed.  We weren’t sure how we’d mimic that for him…ketchup dipped apple slices, perhaps?  The scary thing is with the way that boy devours ketchup, he’d probably love that!)

The girls loved the rides, and Boo (who normally doesn’t like the ones that are a little on the faster side) was so proud of herself for braving the swings today.  Little Mister was fascinated with the animals, eye to eye (at stroller level) with the ducks, turkeys, chickens, alpacas, sheep, and rabbits.  He loved the big horses too, that is until he found out that’s one snout he didn’t want at stroller level! 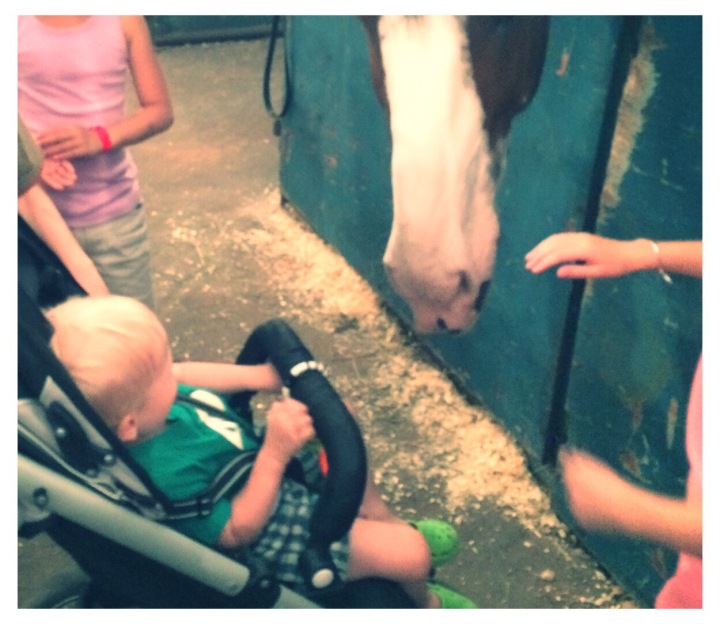 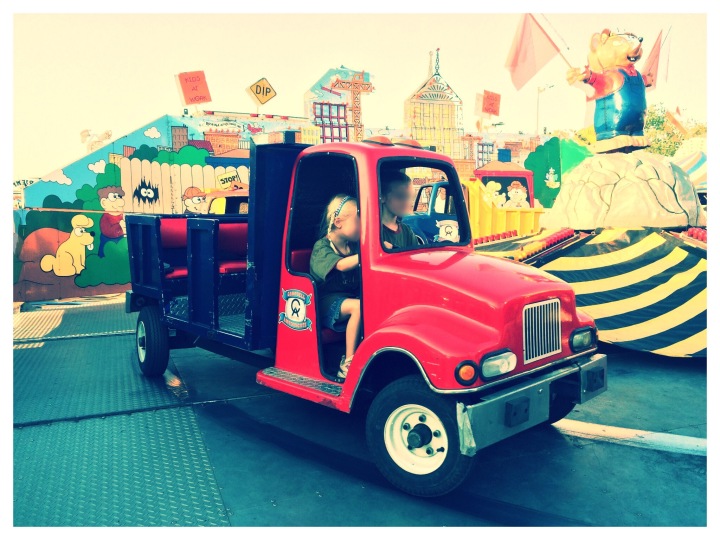 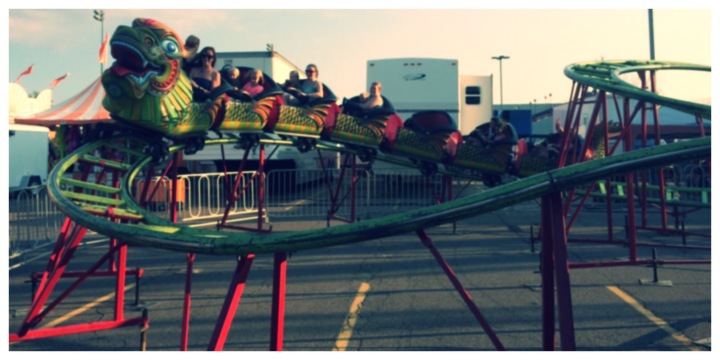 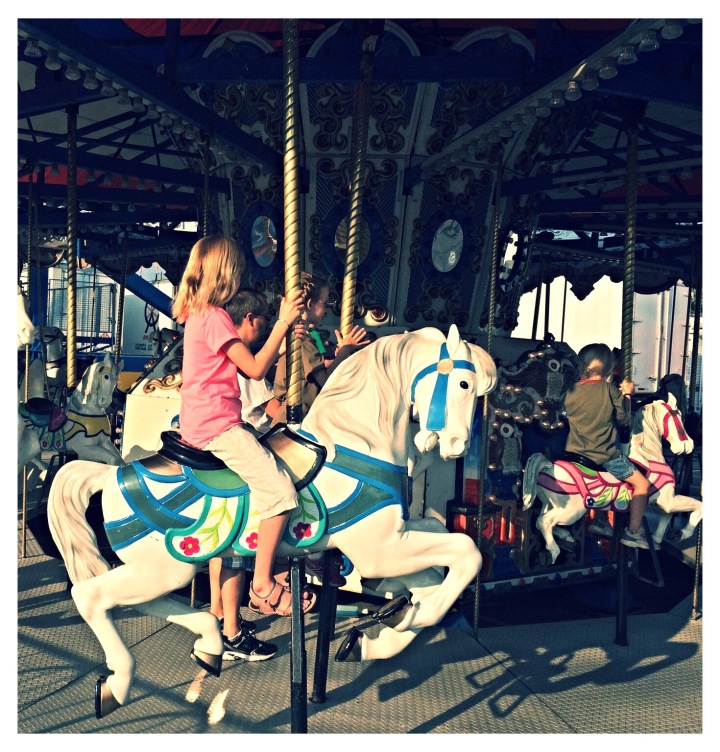 C-Bear and I enjoyed a swim in a local outdoor pool this week (if it’s warm enough outside for me to willingly submerge myself in an unheated pool, it is WARM!).  Afterwards we all had a picnic lunch in the park while the girls had a romp on the splash pad.

Today was parade day, an annual tradition as Old Home Week draws to a close.  Although I was pleased that the parade didn’t seem as long or as loud as other years, I was disappointed overall.  I love the marching bands, the pipe bands, the veterans, and the creative floats.  But my favourite has to be the clip clop of the horses as they trot by.  As Belle was asking if the parade was over, Banky said, “Well, when you see some guy coming to scoop up the horse poop, you know it’s all over.”  Then it dawned on me that there was no horse poop this year.  There wasn’t a single horse in the parade in fact!  And so many of the floats lacked thought and creativity that it kinda felt like an hour and a half long commercial.  I understand the advertising aspect of entering a parade, but it was a little much.  I felt old as I complained to PJ on the way home that the parade is “just not what it used to be.”

But the fun doesn’t end there.  Tomorrow we have plans to go to an air show about an hour’s drive away.  I really hope the weather cooperates because right now they are calling for rain and thunderstorms.  We have a house full of kids (and adults) who are really looking forward to seeing the Snowbirds in action! 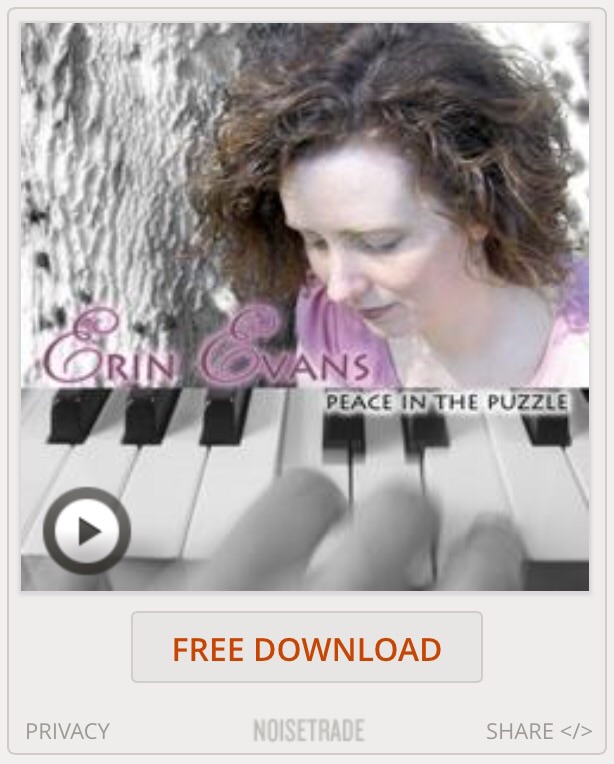